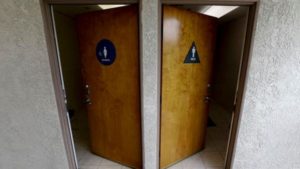 Our schools are (temporarily) safe from gender ideology!

As you may recall, last year, the Obama administration issued a mandate requiring schools and federal agencies to treat “gender identity” as “sex” under the law. (The law here being Title IX, which deals with sex discrimination in schools.) Defenders of the mandate treated it as a way to create “safety” for transgender students and ignored the larger implications of letting men and boys into girls’ locker rooms, showers, and bathrooms.

Almost immediately, there were lawsuits. In August, a federal judge determined that the Obama administration had overstepped their authority and blocked the order from going into effect. Still, the federal government defended their mandate. (In fact, it’s a key part of the case that is currently headed to the Supreme Court.)

But everything changed when President Trump took office.

Under new Attorney General Jeff Sessions, the Department of Justice decided not to defend the mandate at the next scheduled court date. And now, the Trump administration has rescinded it. Their letter undoing the policy should be especially gratifying to parents who are frustrated with a “top-down” education philosophy. It says that the Obama administration did not demonstrate, “due regard” for the states and the local school district when they made this policy.

One of the most stunning things to witness about the effort to force schools to comply with the LGBT agenda, is how none of its defenders are willing to consider the broader implications of their philosophy. They want to pretend that this is only about letting someone use a bathroom.

But when pressed on what this means for society in general … or if there’s any science at all that supports their case … they’re stuck repeating talking points. It’s obvious that their argument is literally indefensible.  As you can see in this video (which will be cathartic for anyone who has tried to have this discussion before):

While the Trump administration has undone one of the worst actions of the last President, we know that one defeat isn’t going to stop the LGBT activists. That’s why we must remain vigilant and be prepared to deal with this on a state-by-state (and even school district-by-school district) basis.

As the video shows, this goes way beyond bathrooms. Taken to its natural conclusion, transgender ideology will break down some of the foundations of our society. That’s why this is the line we have to draw.