Home Article Would a “good neighbor” give your kindergartner these books?

We’ve become desensitized to the way that corporations use leftist politics as a marketing and PR tool. Every June (“Pride Month”), we see companies adopt rainbow versions of their logos for a few weeks or sell rainbow merchandise in a transparent attempt to curry favor with certain groups. The cynical calculations behind such moves are sadly obvious – such companies figure that the negative effects of their LGBTQ+ activism will be outweighed by the positives. Or, in other words, they’ll gain more left-leaning customers than they will lose Christian and conservative ones.

But not every activist corporation draws the line at rainbows on social media and vague statements about “support.” Some actively work to support leftist organizations. Aware that their support might not be viewed favorably by the general public, they also try to keep it under wraps and disown it when it becomes known.

The latest example comes from insurance giant State Farm – yes, the one that claims to be there for you, “like a good neighbor.” This particular “good neighbor” was exposed as an advocate for teaching kindergartners about transgenderism.

“State Farm is partnering with The GenderCool Project to help diversify classroom, community center and library bookshelves with a collection of books to help bring clarity and understanding to the national conversation about Being Transgender, Inclusive and Non-Binary. The project’s goal is to increase representation of LGBTQ+ books and support our communities in having challenging, important and empowering conversations with children Age 5+.”

As the news broke, State Farm immediately went into damage control mode, telling the Daily Caller that agents were told not to donate the books to schools. That claim is contradicted by a Facebook post from a school thanking State Farm for the book donation. 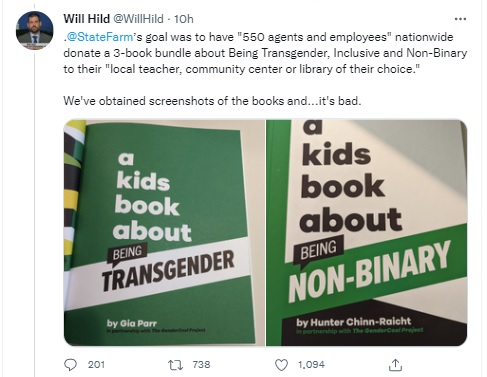 State Farm then wrote to the Daily Caller to say that they are no longer supporting the book distribution and don’t support teaching about gender identity in schools.

While State Farm’s reversal on its transgender advocacy is a good thing, you have to wonder what would have happened if the emails hadn’t been leaked and the company’s involvement in teaching kindergartners about gender identity had never been exposed. Without the negative publicity, would they still be sending gender books to five year-olds?

There are a few important lessons we can learn from this: 1.) Corporate America has bought into the leftist agenda; and 2.) Companies will back away from radical leftist positions when there is a public outcry.

What can we do? We must vote with our feet and our wallets. We need to show companies like State Farm that entering the world of leftist politics has a cost. In other words, “go woke, go broke.”  And we need to support the organizations that support and reflect our values. Whether that means donating to groups that defend Biblical values (like CAAP) or seeking out companies that avoid radical politics, we need to stop funding and supporting companies that undermine our principles.

Are you with us?